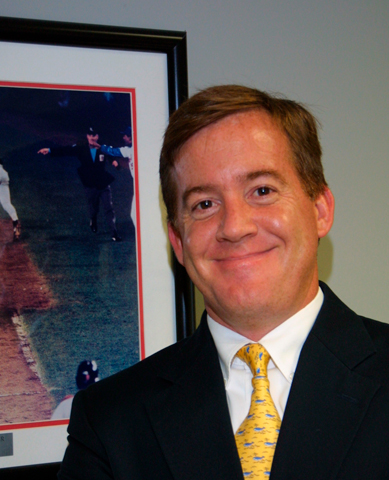 Though most of you are familiar with him as a result of his high profile role as a Commissioner for the burgeoning megalopolis of Allenhurst, New Jersey (270 registered voters), in the light of day, Terrence J. Bolan is an accomplished trial attorney. Terry is a cum laude graduate of Wake Forest University with a B.A. in Psychology where he also enjoyed Distinguished Military Graduate status, which helped us Big Time in gaining entrance to the very affordable Golf Club at Fort Monmouth. Noting that the difference between a 12 inch pizza and a Psychology Major is that a 12 inch pizza can feed a family of four, Terry went on to obtain his Juris Doctor from Wake Forest University School of Law before returning to New Jersey just in time to see the Mets win their last World Series. While they haven’t since, Terry is undoubtedly possessed of an extra “Y” chromosome; Terry is a natural trial attorney who lives to be in court. He has tried upwards of 150 cases to verdict. He is recognized by the Supreme Court of New Jersey as a Certified Civil Trial Attorney.Beyond his extensive medical malpractice and dram shop trial experience, he has also tried many complex cases involving products liability, premises liability, employment discrimination and other such esoteric minutiae capable of boring the pigeons off the courthouse roof. Terry lectures on issues ranging from Trial Strategy, Liquor Liability, and Insurance Coverage. Most noteworthy, he authored and presented “Contractual Risk Transfer: Construction of Indemnification Agreements and Additional Insured Endorsements” before the North American Reinsurance Claims Conference and is actively seeking to sell the movie rights on that subject (current E-Bay Bid: $2.13).